Here is my pet levelling team and a TD script to use it. I run this against the Icespine Hatchlings in Frostfire Ridge. It typically takes t...

Hello, and welcome to another Dianius guide!

This one is a walk-through on how to obtain one of the cutest pets in the game, the Sprite Darter Hatchling!.

What IS the Sprite Darter Hatchling? Why, it's this cute li'l fella! 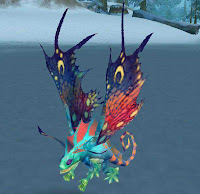 This is a really good series of quests, one of my favourite in the game in fact. You start out helping to rescue some Sprite Darters from the evil Taurens, get given an egg to look after, and end up adopting the hatchling at the end.

Along the way you encounter pretty much all the various types of quests you can get. You have a rescue quest, where you have to keep people and creatures alive. You have the 'kill X of these and Y of those' type quest. You have the delivery type quest, the timed quest, and the 'collect X of these' quest, the 'Go talk to this guy' quest. Pretty much everything is covered, and it all jells together nicely into a compelling storyline.

And of course, best of all, it has a pet at the end!

Now, before you get all giddy, there are a few things you need to make sure of first, so here's a little checklist for you. If you manage to tick all the boxes, you're ready to start. If not, it's back to the drawing board for you!
The first thing you need to know is where the important locations in Feralas are. These are the places I'll be referring to as I go.. 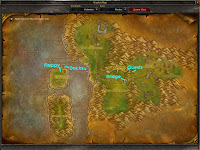 Don't worry, I'll have better pictures to help you find your way as they're needed.

The first thing you need to do is find the quest NPCs. This isn't as easy as it sounds, as they're rather hidden away, so this section will deal with where they are.

I'm going to assume that you're starting from Feathermoon Stronghold on the island, as that's the easiest place to flappy in to.

Get on the boat that leaves at the nearby docks (there is only one boat, so you can't get on the wrong one), and it'll take you (in a roundabout way) to the docks on the mainland, where you get off again.

Follow the path from the docks up the hillside in front of you, where you will intersect the main path through Feralas. Turn right, and follow this until you reach the Verdantis River.

You'll know when you get there, because it'll say 'Verdantis River' in big letters in the middle of the screen. It's a very pretty place, with a bridge and a waterfall... 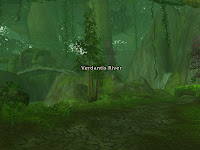 This is the Waterfall... 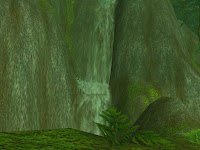 And this is the bridge... 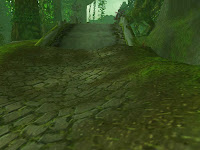 You want to go just over the bridge, and you'll see two huge roots sticking into the ground, with a scallop in the cliffside between them. That's the easy way down, with no sudden drops etc, and a fairly handy reference point 8-) 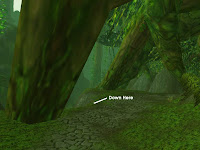 As you can see, it's a nice gentle slope down... 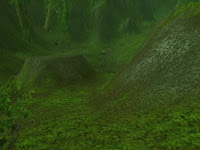 At the bottom, turn right, and you'll see some totems in the near distance. They're part of the Tauren village where your early quests will take place. 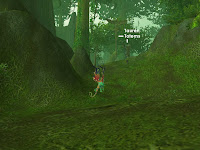 Also some bears... not as pretty, and definately not as friendly! If you can't handle one of them though, you're going to have real trouble with the rest of the quest!

Head towards the totems, and look to your left. Before you get near them, you should see the hidden path up the cliffside, next to a huuuge tree. 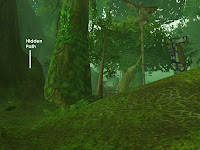 Go up the hidden path, and it'll drop back down to a little ledge overlooking the pool and the Tauren Village. On that ledge are the two initial Quest NPCs, the Moonweaver sisters, Kindal and Jer'Kai. 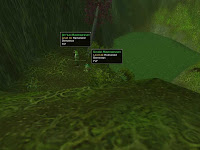 They're spying on the Taurens down below... 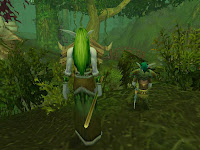 They're particularly concerned with the poor Sprite Darters that the evil Taurens have locked in that big round cage! 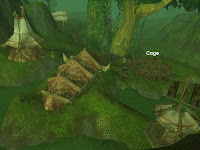 Right, we've found the NPCs, now it's time to help them! The first quest comes from Kindal (the one kneeling), and is called 'Freedom For All Creatures'.

This first quest is the hardest of the lot, and quite easy to fail the first time. I even failed it the first time re-doing it for this Guide! 8-)

If you do fail it, simply Abandon it and ask Kindal for it again. She's quite understanding.

As you can see, for this quest you have to rescue the Sprite Darters in the cage, without getting Kindal killed in the process. Just to make it interesting, you also only have six minutes in which to pull off your daring jailbreak!

Kindal is flagged as a PvP NPC, so you can buff and heal her if you need to, BUT that's risky as it'll turn your PvP flag on, and there's a good chance there will be Horde players about, and the quest is already tricky enough 8-)

When released from the cage, the Sprite Darters make a break for it in two directions. One set will head towards the area you came down into from the dip past the bridge. The other set will head up the path in the opposite direction. They will stop to fight any mob that engages them, and all the Tauren NPCs will do just that.

Your best bet for this section is to follow the hidden path back down, then turn left past the totems into the village, killing every Tauren you pass along the way (this will not turn your PvP flag on), and those near to the cage. Once there's nothing nearby to hurt the Sprite Darters, click the lock on the cage to release them, and follow the ones that head up the path East of the cage, and kill all the Taurens that attack them that way.

You should then save enough (even all!) of the Sprite Darters, and Kindal, and complete the quest. Yay you! 8-)

The path East from the cage, featuring dead Taurens! 8-) 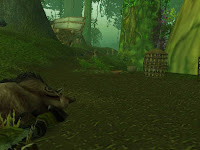 BTW, the observant amongst you will have spotted in the quest text that Kindal was speaking to Zigglebit, not Dianius... As I'd already done the quest about 9 months ago, I couldn't do it again to get all the screenshots, so a friend of mine brought his Gnome along to document the bits I couldn't... Thanks Zigglebutt! 8-)

Kindal is recovering from the last battle, so Jer'Kai (the standing one) gives out the next quest, Doling Justice. 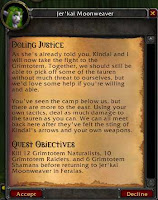 This is a nice simple 'Kill X Mobs' type quest, and doesn't really need a lot of explaining.

I do have all this space to fill up though...

So I might as well ramble on about something!

The Grimtotem Naturalists are the ones in Bear form, and are (obviously) Druid NPCs. They prefer to stay in Bear Form for the entire fight, however if you get one stuck somewhere he can't reach you (I had one try to follow me to the Quest NPCs and fall off the secret path once) they will shift back to Caster form and nuke you from a distance.

The Grimtotem Raiders are Warrior NPCs, and so just like to try to smack you about.

The Grimtotem Shaman are, well, Shaman NPCs, and do all the usual Shaman things, nukes, totems, a bit of melee, etc.

Kill the requisit numbers, and head back to Jer'Kai to give her the good news.

Jer'Kai gives out the next part too, also called Doling Justice...

This is where having the Auberdine flappy comes in handy...

Head back to Feathermoon Stronghold on the Island, and flappy up to Auberdine. Once you land, flappy over to Rut'Theran Village on Teldrassil, and go through the glowy portal thingy into Darnassus.

Once in Darnassus, head to the Temple of the Moon, and the Elf you want to talk to is right on the top teir of the balcony running round the place. Head right to the back to find the ramp up, and keep going until you find her.

The map below shows where she is in Darnassus. 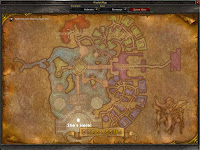 Once you've found her, click her and go through the hand ins.

At this point the quest line seems to fizzle out... Tyrande doesn't give you any more to do. However, Kindal has some new work for you back in Feralas now, so reverse the previous journey and flappy back down to see her.

Before you carry on with this next part, a couple of those check boxes are now fairly important...
You'll see why as we go, but make sure you have these covered before carrying on!

Ok, so you're all set on the above, back to Kindal you go!

It's at this point that the quest line actually starts talking about you getting one as a pet... yay! 8-) 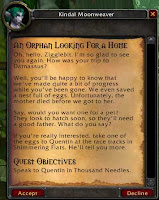 You have two choices here about how to get to Quentin...

1) Head back to Feathermoon, flappy to Gadgetzan, and run to Shimmering Flats.

Overall they take about the same time, so it's entirely up to you. If you do ride though, be careful to go around Camp Mojache further up the path in Feralas, and mind the two guards outside Freewind Post in Thousand Needles!

Personally, I prefer to ride.

You can easily skirt round Camp Mojache to the North.

Quentin is standing by the grandstand, at the start / finish line of the racetrack. Complete the current quest with him...

He also gives you the next stage, 'A Short Incubation', and this is where you need those two Elixir of Fortitude I kept prompting you about... sure hope you brought them!

Once you've given him the Elixirs, he gives you the next step, 'The Newest Member Of The Family'

It's here that the rest of those tick boxes come into play... you only have an hour to get to the far side of the other continent, eep!!!

Hearthstone (or Portal) back to Ironforge, and take the flappy up to Aerie Peak in The Hinterlands.

Once you land, go down all the steps, follow the path round to the left, and go into the Dwarf fortress there.

The Dwarf you need to talk to is at the very bottom, at the back, so head down one of the side corridors (doesn't matter which) all the way, down the stairs, down the stairs again, and you should find him hanging about.

Complete the quest with Agnar. Remember that the quest timer keep ticking down until you've completely finished both parts! 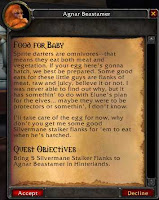 Agnar gives you the next step, 'Food For Baby'.

Silvermane Stalkers live at the far side of Hinterlands, see the map below, and just to make things even more interesting, they're invisible! The easiest way to find them is to just run about, and wait for some to attack you 8-)

They don't always drop the Flanks, I guess some of them are hollow or something 8-), but it's a 1 in 2 or 1 in 3 drop rate, so provided you can find them you usually won't have to kill too many to get your quota. 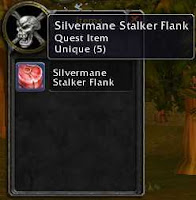 Once you have all five, head back to Agnar again.

Silvermane Stalkers location... they're all round this area. 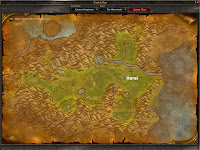 Hand the meats in to Agnar...

The final step is just talking to him again... I love that it's called 'Becoming A Parent' 8-)

Or, in this case, a Daddy, as much as you can tell with Gnomes anyway 8-)

You can now right-click on your egg, to summon your lovely little fairie dragon, which will happily follow you around all over the place!
Awwwwwwwwwwwwwww!!! 8-)

That's the end of this Guide. I hope you enjoyed it, and find it useful 8-)

Many thanks to Zigglebit for helping out.